A Framer’s Guide To Cacao Ceremony 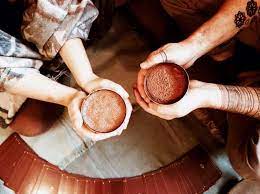 A Framer's Guide To Cacao Ceremony

Our in house 'journo' and Self Development Coach gives us the low down on Cacao Ceremonies.

Cacao has a long-standing history of opening the heart and boosting mood, and today, more and more people, myself included, are exploring its benefits through cacao ceremonies.

The thousands-of-years-old Central American ritual that Ancient Aztec and Mayan elites leaned on to connect with the gods and promote good health has become much more mainstream in recent years as we yearn for connection.

I first learned of the ritual six years ago when I was researching a story about Gwyneth Paltrow and her wellness practices, as you do – and I’m not going to lie, I really did wonder if this was another Yoni egg situation, if you know, you know.

And like anything that is considered the ‘other’ by societal norms, I did question at first what the benefit of partaking in the ceremony was until I had the opportunity to try it – and boy did I get the buzz instantaneously.

Since that fateful evening in late 2017, I’ve dipped in and out of drinking hot ceremonial-grade cacao, having really indulged in it during the pandemic. But like most things post-Covid, it fell by the wayside. So, when the opportunity presented itself earlier this month at FRAME Hammersmith to get reacquainted with the ritual I jumped at the chance.

On a mystical level, raw cacao is said to open the heart and truthfully writing, I love any opportunity to hold space for a practice that promotes self-love. So on a dreary, dark Tuesday evening, I found myself sitting in a semi-circle with 14 other eager soul searchers and wellness warriors as Intuitive Practitioner Rachael Morley guided us through a 90 minute ritual under the November full moon.

Rachael explained that the cacao we were drinking was ceremonial-grade, which meant it was between 70 and 100 percent cacao, and infused with a touch of mushroom, maple syrup and a pinch of rose for good measure.

After pouring us each a small cup of cacao, Rachael instructed us to close our eyes and led us through a simple breathing pattern, inhaling into our bellies, and exhaling out of our mouths in an exaggerated sigh.

As a state of calm came over the studio, she asked us to hold the cup in front of our hearts, as we focused on what intentions we wanted to call in, and what we wanted to release. She told us to bring the cup under our noses, and slowly breathe in the aroma, as we set our intentions.

After kindly telling us to start drinking the elixir, a sense of calm came over me with each sip as I focused on the flavour, kind of like a bitter Turkish Delight, and forgot about the worries and work I hadn’t yet finished that day.

Finishing our cacao, Rachael invited us to vocalise our intentions, although not a requirement, using a sacred stone. ‘There’s power in saying your intentions out loud,’ she said – and powerful it was. Rachael created a safe and peaceful space that allowed everyone to truly open up and share what no longer served them.

Perhaps it was the full moon energy, or maybe it was just the environment Rachael had created, but once everyone said their peace, a sense of lightness came over the studio.

Most ceremonies also include at least one other modality that helps bring participants into an altered state, this can be meditation, breathwork, ceremonial chant, or, in our case, a sound bath. To be fully transparent, I can’t really tell you what happened during the sound bath portion of the workshop, not for any reason other than I was so far in a state of calm and relaxation that I felt I was on another plane.

With each bang and tap of Rachael’s gong and crystal bowls, I fell deeper and deeper into a sleep-like state, releasing any expectation or responsibility from my being. By the time the ceremony came to an end, I felt like a newborn baby opening their eyes for the first time and only five minutes had passed.

While I didn’t have any emotional release this time around, many do, and people can also experience physical releases or visions. It’s nothing to be afraid of, it’s something more so to be mindful of.

So, for anyone considering signing up to one of Frame’s Cacao Ceremonies I would recommend bringing an open mind, and an open heart. You’re in a safe space to explore whatever comes up for you, this is your time to lean in and release in the presence of trusted professionals who want only the best for you.