ON THE REBOUND FRAMERS? 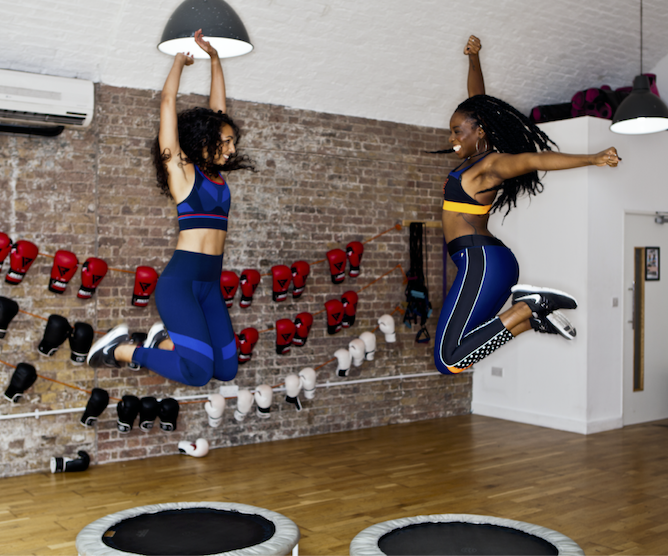 Rebounding has long been a fave at Frame and we’re excited to announce Rebounding is now in Victoria!

Beats cellulite check, joint-friendly check, addictively fun check and guaranteed to leave you with a spring in your step all day CHECK! Rebounding has long been a fave at Frame and even the guys at NASA have got in on the action deeming Rebounding the most efficient and effective form of exercise…you can’t argue with science.

Based on a mini trampoline, Rebounding is a great cardio workout – bound to the beat and work up a sweat. Rebounding gives you all the benefits of running; working your heart, lungs and muscles without your joints taking a hit. Rebounding also affects the lymphatic system – unlike the cardiovascular system, the lymphatic system doesn’t have its own pump to rid the body of toxins. The jumping motion in Rebounding creates a pump-like effect which gets the lymphatic draining going, helping to rid the butt and thighs of cellulite. Rebounding’s also great for strengthening the core plus its low impact so kind on your joints and can actually strengthen and stabilise the muscles around your joints.
The sciency bit, Rebounding also increases bone density, going back to the guys at NASA, they found that astronauts lost 15% of their bone density in just 14 days in space, research confirmed that Rebounding was the only effective exercise which helped astronauts regain lost bone density. But even better than that Rebounding is tons of FUN, and it’s impossible to not keep that spring in your step for the rest of the day.

Bounding virgin? Expect full-on feel-good vibes, set to a banging playlist with great instructors. We’re super excited to announce Rebounding is now in Victoria next, join us for 45 minutes of non-stop fun on Monday, Tuesday, and Thursday evenings as well as Saturdays! Keep your eyes peeled on the timetable for all the bounding. You can also bound in Shoreditch, Angel, Fitzrovia and Kings Cross

Plus be the first to know about exclusive deals and newness